My next youngest sister is also familiar with this phenomena of a thing being “everywhere” once we’ve gotten interested in it. I am pleased to know I am not the only one who feels like this is a thing that happens.

I am uncomfortable with the ideas my Wolf has been running by me regarding our recollection of the initial impression we had of Dr. Who, and also with a connection–not yet fully fleshed because I keep trying to dismember that patchwork monstrosity–between a film we saw (and two we’ve refused to see), and our place of work, and that stupid Seth Rogan, of all people.
It’s this sort of thing that makes me want to tell myself, “you’re drunk; go home.” Except that I am not. I’m just…you know. A crazy person, I guess. It’s a disappointing conclusion. I always hoped I would not be that crazy person who talks to ourself.

One of my friends has gotten in touch after a long time of not really speaking, even though we were facebook friends. It’s a peculiar development, but not an unwelcome one, I suppose. It is nice to think that people remember me fondly, even if most of our interactions took place on–heaven help me–my old Xanga, where my self-talking-tos and ravings about nothing at all took place.
(No, not my Danish friend…I have little expectation that I will find her…this is someone I knew vaguely through one of my high schools.)

One of our employees has been sick for a long time. Not been at work or even scheduled this past month because it was serious enough to require hospitalization…today the caregiver called us and said they are not expected to make it through this weekend.
I cannot say I knew this employee well, since our shifts did not often overlap…but…I feel sad. If this turns out to be the case, they will contact us with info for the funeral…and I feel sad about that. I mean…do I go? Would it be right? I feel like it would not be…but…I don’t know. I feel sad for our employees, and I do not even know why.

Ate too much junk food today, but after sitting very quietly these last four hours (and taking several pepto bismal tablets), I finally feel settled enough that I might sleep. And I would like to very much, since I have been awake for about 22 hours at this point. (Bloody HATE opening shifts…)

I started a thing at work. We have these squishy chickens (like, stress balls in chicken shape) in our office, and it started out as one chicken, which we named “Lucky Chicken”, but our GM brought three new ones with him when he came back from a conference a few weeks ago…but the new ones look different. More detailed and calculating (so far as a squashy, foam chicken can look) compared to slightly surprised looking Lucky Chicken.
But…I don’t know what possessed me to do it, but I was getting ready to lock up the office a few nights ago, and decided to arrange the chickens so that two of the new ones would be beheading Lucky with a pair of scissors, while the third new chicken sat in judgment on the coin tray… 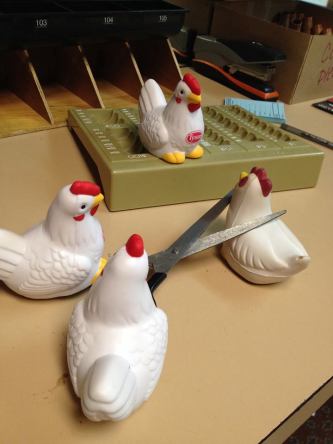 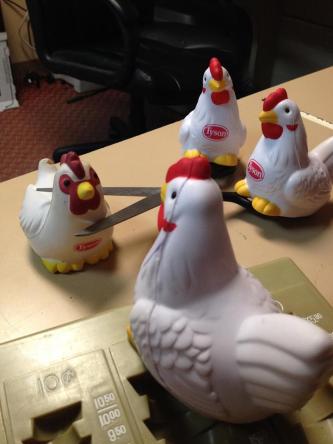 And then it kind of took off from there.

Kurt wanted in on the murder scene for my next closing shift, and we decided to hang Lucky. Kurt wanted to give the new chickens hoods, but I thought that was going a bit far. We put a napkin over Lucky’s face instead.

There he is. Waiting for the new chickens to push the quarter tray from under him. 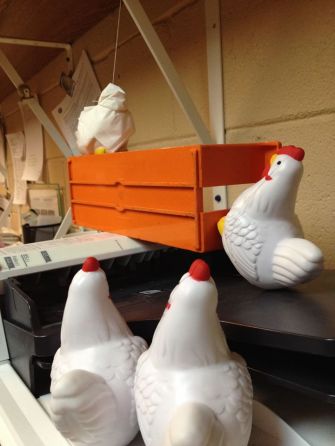 And then today…there was a splotch of something (BBQ sauce?) on the counter, so I took advantage of that and have one of the new chickens shoot Lucky with a marker…

I should stop. I really should.
But the other managers just keep encouraging me by finding it hilarious. How can I possibly stop murdering Lucky now? D: 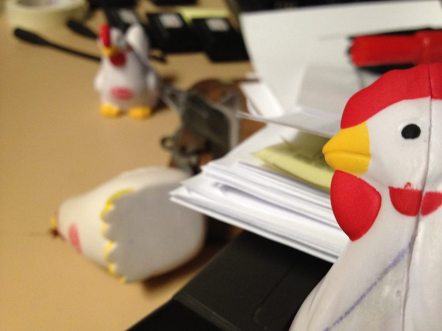 (I swear, I do real work sometimes.)

So, Chris and I have started watching some Dr Who DVDs… from the first season.

The lead female character, Rose, kind of gets on my nerves sometimes… and so does her mother.

I’ve discovered that when British women get really emotional and talk loud, that their voices suddenly become a thousand times less attractive.

Anyway, I should go and:

“Yes, but there was another who knew where it was to be hidden. I don’t know how long they tortured Gollum, but they were able to extract one sentence from him: ‘The ring is in a K-mart super center in Winston-Salem, North Carolina, on the corner of 3rd and Main street!’.”

Gandalf (from “The Quest for the Pizza Ring of Power”)